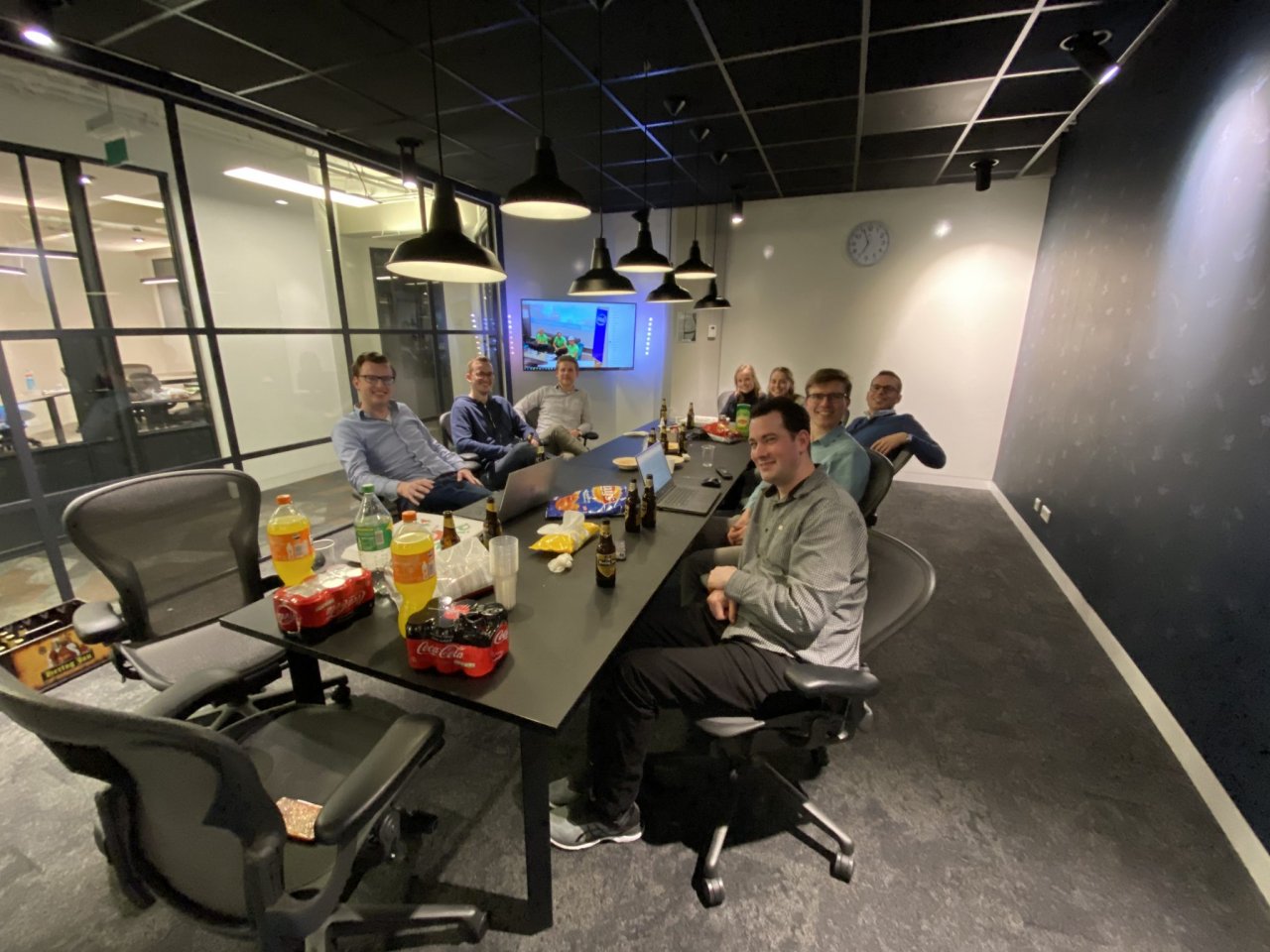 Notilyze participated in the SAS EMEA Hackathon 2020. The goal of this Hackathon was to find a way to add sustainable value in real life business. As the connection with data for good was important, the team of Notilyze made a model to extract information from satellite images to help estimating the number of refugees in refugee camps in Nigeria. Better camp size estimation ensures that the demand in each camp can be met easier, as surpluses in goods can be moved to camps with shortages, leading to a more effective cross-camp collaboration. With this case Notilyze ended up winning the first prize.

For this article, a few team members were interviewed about their personal experience in participating in the hackathon.

You’ve accomplished a great case in the hackathon. What was your role in the team?

Fleur: I was part of the start of the project where we build the Camp Forecast tool with IOM and ELVA. During that project I analyzed the data and used this knowledge for the Hackathon project. Besides, with a helicopter view on this project, I helped with how to use and communicate the solution of the hackathon challenge in the form of a video. 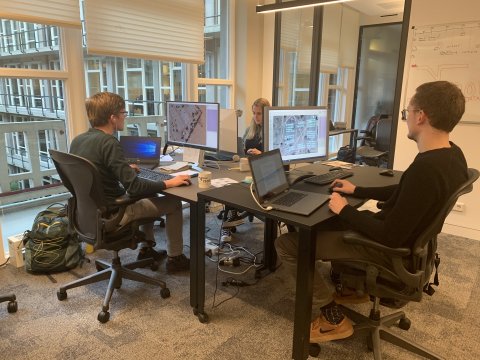 ‘’Making this training dataset came along with a lot of labelling, which really was a team effort.’’

Paul: As Data Analyst, my role in the team consisted of multiple tasks. First of all, I was involved in combining the data sources (satellite imagery and surveys). Secondly, I built an Object Detection model to detect the tents from the training dataset. Making this training dataset came along with a lot of labelling, which really was a team effort. Finally, I supervised the creation of a dashboard with useful insights, which has an easy user interface.

Quinten: As a Data Scientist at Notilyze, my role in the SAS EMEA Hackathon was mainly to preprocess all satellite images obtained from Google Earth. The most crucial part of this preprocessing was the contrast stretching of the images, which greatly improved the accuracy of our object detection model (see our previsous blog for more elaboration on this). I was responsible for writing a script in SAS Viya that could efficiently preprocess tens of thousands of images.

And what did you liked or enjoyed most participating in the hackathon?

Paul: I really liked the aspect of a central theme, without getting a pre-specified problem to solve. Although this kind of hackathon requires a little more creativity in the beginning, it results in really different and interesting cases from all teams. I think in this way more value is obtained from a Hackathon.

Fleur: Working with a great team on a project that is so valuable to society. 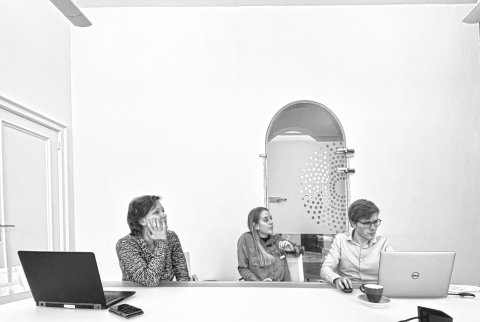 ‘’Luckily I could reach out to Jaimy van Dijk, Data Scientist at SAS.’’

What was your biggest challenge in the hackathon?

Fleur: To visualize our solution in a video, which was a great challenge!

Paul: My personal biggest challenge was to use SAS VDMML to create an Object Detection model called a ‘Faster R-CNN’. Luckily I could reach out to Jaimy van Dijk, Data Scientist at SAS. She could answer some of our most prevalent questions, leading to a working model.

What have you learned by participating in the hackathon?

Quinten: From a technical perspective I learned to use the SAS Viya CAS Image Action Set and how to get the most out of its functionalities. It turns out there are plentiful possibilities in SAS to preprocess images in a meaningful way, all the while being super quick compared to other software. In a broader sense, it was an interesting challenge to go through the full process (from defining the problem to obtaining results) in a relatively short period of time.

‘’We achieved this by writing articles and making small videos, which were all very new things for me to do!’’

Paul: Considering the possibilities with SAS, I have learned how to build an Object Detection model. Also I have learned how to incorporate images in a dashboard as Data Driven Objects with some help from Peter Kleuver (SAS). Another thing I learned is how much effort is put into marketing. As I am currently graduating for my MSc. Econometrics and Management Science, this project was the first one that involved a lot of people outside the world of data science that we also wanted to involve in this project. We achieved this by writing articles and making small videos, which were all very new things for me to do!

Fleur: To have a role in different fields in one project, from data analytics, marketing to graphic design.

So now the hackathon is finished, what does the future look like for this project?

Our collaboration with ELVA and IOM does not stop here. Based on the work done during the hackathon, we will jointly determine what steps need to be taken to get this dashboard into production. A specific and tangible step to improve both the model and the applicability of our solution is to find a provider of satellite imagery. During the hackathon we have worked with imagery from Google Earth, but it is necessary to get a more stable and more frequent stream of images for all areas of interest. 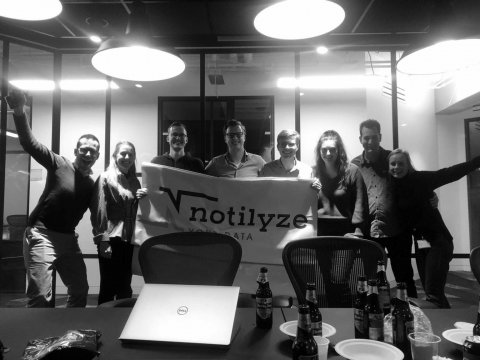 How did you watch the announcement of the winners?

Together with colleagues we watched the announcement, enjoying some pizza and drinks.

What was your reaction when you’ve heard Notilyze had won the first prize?

Paul: Of course I was very excited at the moment I heard we had won the first prize! But to be honest, it took some time for me to really realize what this meant for us. I am really excited to go to Cary somewhere in the near future!

Fleur: I was so happy and enjoyed celebrating this with the team!

In the near future we will update you about the next steps that need to be taken. And about our road to Cary. So stay tuned for more…

Monica Knook is currently doing her graduation Internship in Global, Marketing & Sales at Notilyze. Besides doing her internship, she was also part of Notilyze’s SAS Hackathon team. In this team she was involved in the Marketing of Notilyze’s case.