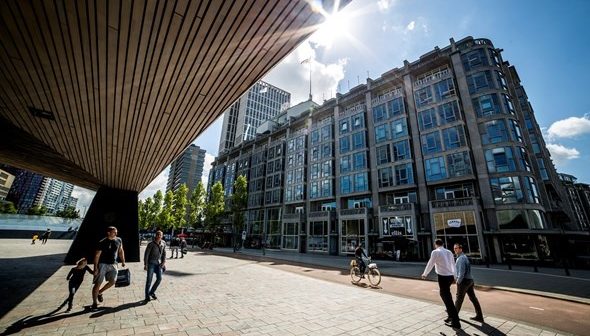 Last year, Jos van Dongen from SAS visited us for an interview for their blog series on Dutch Data Science. The full blog post can be read below, or at the SAS Blogs site. Thanks again Jos!

Part 5 of this series brings us to Rotterdam again, where I met with the two Notilyze founders Colin Nugteren and Tom Dogger. Both of them studied econometrics in Rotterdam, but go back as far as the F4 soccer team they were both playing in as kids.

Company overview
The term “startup” is an understatement here: The company was founded in December 2016 and opened shop on April 1, 2017. These first four months were spent on preparing the website, setting up the platform and talking to prospects and other interested parties. It also enabled Tom to fulfil a lifelong dream and make a trip around the world! The company is already growing: On Oct. 1, former SAS sales executive Eric Mathura joined the team as commercial director, and the first student was hired this month.

It was during the Analytics Experience conference in October 2015 that they started wondering why advanced analytics capabilities should only be accessible to Fortune 500 companies with deep pockets.

The core business of Notilyze is based on an idea the two founders already had as students back in 2009: offering analytics as a service to small-to-medium size businesses on a shared platform. Back then, though, the cloud was still in its infancy, so the idea was put on ice and Colin started working for a small credit management company called DirectPay. Which, incidentally, is the company he already worked for as a data scientist during his studies. Colin was “the right man in the right place at the right moment” and, as the Chief Analytics Officer, helped DirectPay grow from 25 to 160 employees and similar revenue growth over a period of seven years. Tom joined the team after four years, and the two of them helped DirectPay to become a fully data- and analytics-driven company, including development of entirely new lines of business. Still, the idea of starting on their own kept itching in the backs of their heads. It was during the Analytics Experience conference in October 2015 that they started wondering why advanced analytics capabilities should only be accessible to Fortune 500 companies with deep pockets. In the meantime, cloud technology had matured in such a way that today the question is not if companies are going to move to the cloud, but when.

This, combined with a strong partnership with SAS, is helping Notilyze to reach its goal: analytics for the masses. Analytics as a service, that is, because Colin and Tom don’t believe in consulting as a growth model – it doesn’t scale. Consulting is only done on a strategic level, helping potential customers to translate their ideas into concrete propositions. After that, any solution that is developed for a specific use case should have the potential to become a service with multiple applications. The value Notilyze adds here is extremely short lead times from idea to realization (sometimes as short as 30 minutes from getting the data to the first results!). And after that, near zero latency and friction between development/experiment and migrating a solution to production, plus running everything built as a service. Their secret? An integrated data and analytics platform provided by SAS. Notilyze has very ambitious growth in mind, based on the expectation that the market for analytics solutions will grow a hundredfold in the next couple of years. When asked where they’ll be in terms of revenue five years from now, Colin answers, “Tens of millions.”

Cool projects
Ever heard about “coffee pattern recognition”? Coffee machines nowadays are practically given away for free, as long as you have a service contract and a subscription for beans. Coffee as a service, so to speak. What Notilyze developed was a machine learning model that can fairly accurately tell what type of coffee the machine is producing based on real-time energy usage patterns. Both invoices and maintenance planning are now based on the outcomes of this model.

The second cool project Notilyze is working on is actually one of the foundations of its operation: decision management as a service. Decision management is the art and science of combining machine learning models and business rules; the models learn from data, detect patterns and provide predictions, whereas business rules can be used to enhance these outcomes with human domain knowledge. In this sense decision management is already a form of AI-augmented human decision making, but adds automation to the process as well. Offering this capability as a service will make high-end capabilities accessible to small and medium businesses, providing them the means to disrupt their markets without major upfront investments.

Continuous challenges
The number one challenge is data availability. An organization might buy into a vision and wants to execute, but then it turns out there’s no data (or not enough) to run the analytics on. A related challenge is the availability of labelled data to use in supervised learning algorithms. And as you might have guessed, finding the right people is also a challenge for Notilyze. However, SAS® is mentioned as a benefit here since it supports people with multiple skill levels, from the point-and-click analyst using visual interfaces to the advanced R, Python or SAS programmer working with Jupyter notebooks using the SAS® Viya® APIs.

The future of AI and machine learning
Both Tom and Colin think developments in AI are fantastic and the biggest driver and enabler for growth of the company. They also see AI as a mechanism to answer business questions, so you won’t have to go hunting for a specific report anymore. However, they don’t necessarily agree with AI being a bigger revolution than electricity, as some futurists claim. They think the impact on the job market is overstated because we need AI and intelligent robots to do the work for us that our aging population is not capable of doing anymore. Notilyze wants to be the front-runner in applying the latest AI technology, and hopes AI keeps developing at its current high pace since it opens up many new business opportunities.

My take
I really like the “just add data” approach Notilyze is taking. Though it may seem that the analytics as a service market is overcrowded already, almost no one is targeting the SMB market Notilyze is serving. If Tom and Colin can really scale their solutions to serve a mass market, there’s no limit to where they can go. Besides, it’s refreshing to see two young, ambitious entrepreneurs chasing a dream they already had as students. Not only chasing it – making it a reality!